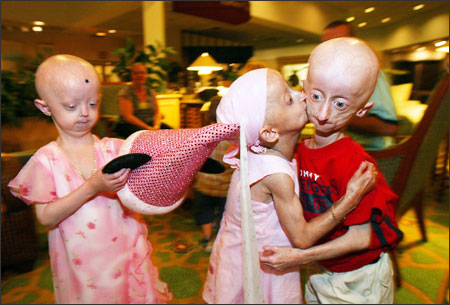 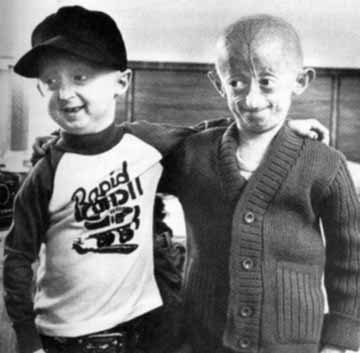 Progeria, or Hutchinson-Gilford Progeria Syndrome, is extremely rare. Currently, there are less than 40 cases reported worldwide. According to the Mayo Clinic, since 1886, only 130 cases have been documented. Progeria is a genetic condition that causes accelerated aging in children. A mutation on the LMNA gene which produces a protein called Lamin A causes nuclei to be unstable which leads to accelerated aging.
Children with Progeria are born looking healthy. They do not start to shows signs of premature aging until they are about one year old. Most children with Progeria live only to their teenage years, because Progeria, without question, is unfortunately, and devastatingly, fatal.
Research and information for Progeria can be found at Progeria Research Foundation.
Klik untuk memperluas... 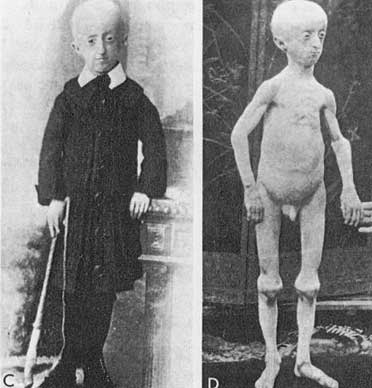 [FONT=Arial, Helvetica, sans-serif]Precocious senility of striking degree is characteristic of this exceedingly rare disorder.[/FONT][FONT=Arial, Helvetica, sans-serif] The name progeria stems from the Latin and Greek words pro and geraios and means literally, 'early old age'. The disease is also known as the Hutchinson-Gilford syndrome, after the physicians who first described it, Hutchinson in 1886 and Gilford in 1904. Children with progeria age about ten times faster than normal. This means that these children develop the symptoms of other diseases, which normally occur only in people in their seventies or eighties, at the early age of ten or twelve years.

[/FONT][FONT=Arial, Helvetica, sans-serif]Generally, the children look perfectly normal during their first year of life, but after this the symptoms unfold rapidly. Among the first symptoms to develop are: hair loss, disappearance of cheek fat with sharpening of facial features, and diminished growth. Subcutaneous fat rapidly disappears completely and the skin becomes thin and brownish with the underlying blood vessels clearly visible. Dental development is also abnormal with delayed shedding of deciduous teeth and early loss of permanent teeth. A severe and painful arthrosis develops, with thickening of the joints leading to impaired mobility. As the children turn old within a remarkably short time, their change in appearance can be shocking. The head is disproportionally large and bald and the facial appearance is one of hollow cheeks with a tight skin, scanty eyebrows and eyelashes, a pointed nose and, frequently, either crowded or missing teeth. A severe growth retardation develops and progression of the aging process is equally as relentless; premature atherosclerosis causes many children with progeria to have their first stroke or heart attack at a very early age, mostly between their twelfth and fifteenth year of life.

[/FONT][FONT=Arial, Helvetica, sans-serif]Progeria is extremely rare. World-wide approximately 36 people are known to have this disease. Following the first description of the disease in 1886, approximately one hundred cases have been registered. The incidence is estimated at 1 in 10,000,000 births for the annual number of new cases, equally spread over all parts of the world and irrespective of race or skin colour. The exact cause of progeria is still unknown. Possibly, it is caused by a genetic defect in the repair of DNA, the genetic material in all living cells, but this has not been proved. Due to the extreme rarity of the disease and, usually, its sporadic occurrence within families, it is at present impossible to identify the genetic defect by simply performing studies within families. In most cases the mutation is probably 'fresh' or has occurred only by chance in the child and does not occur in either of the parents. For this reason, prenatal diagnosis is not possible.

[/FONT][FONT=Arial, Helvetica, sans-serif]Children with progeria bear a remarkable resemblance to each other both regarding their outward appearance and their symptoms. Their mental development and intelligence is entirely normal and appropriate for their calendar age. At school they are able to perform quite well and thanks to their open and cheerful nature are readily accepted by their schoolmates. However, due to their unusual appearance, they are frequently stared at by strangers and must therefore learn to cope with this from an early age. Their witty reactions to unthoughtful remarks are well-documented. When Jason, a boy with progeria was asked, "When are you going to die?", he retorted: "When are you going to?".[/FONT]
Klik untuk memperluas...

Seth Cook. salah satu anak yang menderita Progeria Syndrome
[Seth Cook has progeria, a rare disorder that causes accelerated aging. His body has characteristics of someone in his 80s, but he is still a boy at heart. source: seattlepi] 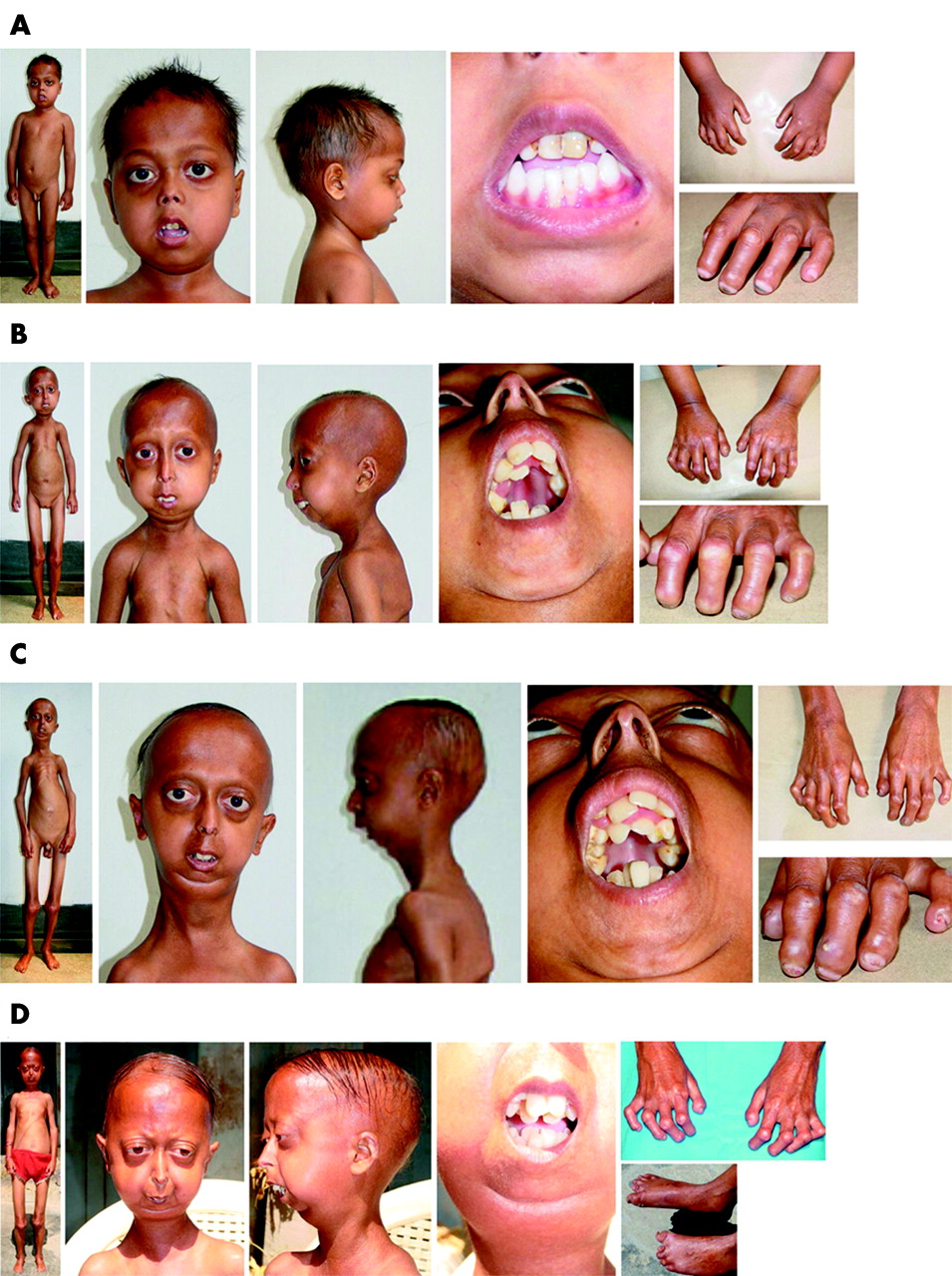 IndoForum VIP: The Special One