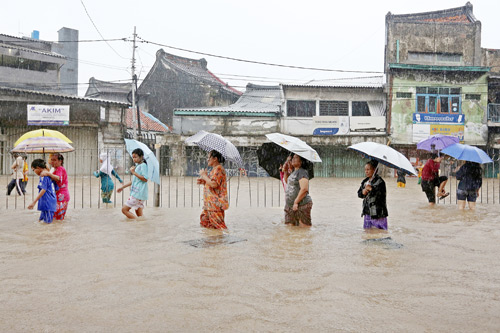 A bigger flood is expected to hit Jakarta as incessant and heavy rain has been forecast to continue until Monday.

The Jakarta Disaster Mitigation Agency (BPBD) and the Meteorology, Climatology and Geophysics Agency (BMKG) called on residents in the city and its outskirts to remain on high alert and prepare to face worsening conditions in the next few days.

The BPBD reported that the number of subdistricts affected by flooding had continued to increase, with incessant rain in Greater Jakarta and in headwaters of the rivers, disrupting power and medical facilities, and undermining transportation and business activities.

Following incessant rain on Thursday and Friday, overflowing water in several main rivers inundated at least 48 subdistricts in 27 districts in the city alone and claimed two more lives, raising the death toll to seven as of Saturday afternoon.

BPBD spokesman Edy Junaedi said on Saturday that one of the two victims had been identified as Sutoyo, a 44-year-old resident of Kebon Bawang, North Jakarta, who died after being electrocuted in his home.

“The second victim, however, has yet to be identified,” he said.

Edy said that around 20,000 people had been affected by flooding in 48 subdistricts that were inundated with up to 6 meters of floodwater after the water level at the Katulampa and Manggarai sluice gates reached alarming levels yesterday.

National Disaster Mitigation Agency (BNPB) head Syamsul Maarif said that 10,530 residents across the city had been evacuated to 97 temporary shelters as of Saturday.

There could be more evacuees than the BPBD’s released figure as Pangadegan subdistrict in South Jakarta has evacuated more than 2,500 residents, while Kampung Melayu district is housing more than 3,700 evacuees in mosques, sports buildings and tents.

“The gate was opened by 50 centimeters since last night,” he said.

In the case of alarming water levels, the authority to open sluice gates is in the hands of the governor while the authority of Ciliwung and Cisadane Rivers’ Control Office is under the Public Works Ministry.

Edy said that the city had been operating the six pumps at the Pluit Reservoir to pump water out to sea. “I think it will be effective as the water level at the Pasar Ikan sluice gate in North Jakarta has been gradually decreasing,” he said.

In Bekasi, West Java, floods not only hit housing complexes but also inundated Dr. Subki Abdul Kadir Islamic Hospital and Bhakti Kartini Hospital, both located on Jl. R A Kartini in the city-center.

A number of housing complexes in Bekasi — including Harapan Baru Regency, Bintang Metropole, Masnaga in Bintara, Tamang Narogong Indah in East Bekasi, Griya Asri 1 Tambun and Mangun Jaya Tambun — had also been inundated with 50-100 centimeters of floodwater. Most residents, however, continued to stay inside their homes.

Residents that required medical attention were not able to reach hospitals as roads were also flooded.

PLN spokesman Roxy Swagerino said the company could not predict when power supplies would return to normal. “We are monitoring progress on the field,” he said.

Governor Joko “Jokowi” Widodo continued to closely monitor the areas most affected by flooding. On Saturday, Jokowi visited several districts, including Balekambang, in Kramatjati, East Jakarta, where most houses were totally inundated.

omg, why they're not anticipating for the flood, as this disaster comes every year