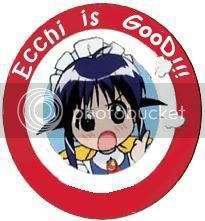 10-year old Negi Springfield is a wizard-in-training, and needs only to pass one more test in order to become a Master Wizard. Unfortunately, his final task is a bizarre one- to become a English teacher at an all-females boarding school. As soon as he arrives, he completely embarasses one of his students, Kagurazaka Asuna, and replaces the teacher she loves, which garners her hatred. To make matters worse, Asuna learns that Negi is a wizard,and promises to tell unless he helps her out. But, unfortunately, circumstances force them to work together to do many things, from fighting evil wizards to helping the class pass their final exam, with a lot of humor, magic, and romances thrown in.

Having defeated Chao at the end of the Mahora Festival (manga story), Asuna forms the club "Negima-dan" to search for Negi's father Nagi (which under the guise of being a club interested in travelling to England). To this end, Asuna, Setsuna, Konoka, Nodoka, Yue, Paru, Chisame, Chachamaru, Asakura, Sayo, Ku Fei, and Kaede have trained at Eva's resort (Eva being honorary adviser and Negi being the teacher-sponsor). Eva doesn't like "Negima-dan" as the name of the club, and so names it "Shiroki Tsubasa" -- Japanese for "White Wing" (the Latin being "Ala Alba"). Now it is summer and that means a summer festival (with a test from Eva), a time at the beach (where Negi's childhood friend Anya comes to visit), followed by a trip to an onsen for some fun before their trip to Wales.

Plot Summary: Sometime after all the events which took place during Negi's first year as a teacher, Class 2-A goes on a school trip to a beautiful island for Spring break. Everything is fine now, but troubles continue for Negi, because he's still the main atraction of the class. But he has something else to worry about, Asuna is angry at him because he told her she had nothing to do with his studies as a wizard. During the trip, the situation gets intense as Asuna's friends try to help Negi make up with her.

Plot Summary: The story begins Nodoka and Yue practicing casting spells. While training, Yue convince Nodoka that they casting a red string of fate spell on Nodoka. A spell which shows them whose their fate is. One end connect to Nodoka and the other end connect to Negi. Unfortunatly, this spell isn’t a fate connection, but it just connects two people with a red string. The rest is about how Nodoka and Negi spend the day trying to take their bath, while their hands are tie together.

Based on a shounen manga written by Saki Hasemi and illustrated by Yabuki Kentarou. It is serialized weekly in Shounen Jump.

The story is about Yuuki Rito, a high-school boy who cannot confess to the girl of his dreams, Sairenji Haruna. One day when coming home and sulking in the bath-tub a mysterious, nude girl, appears out of nowhere. Her name is Lala and she comes from the planet Deviluke, where she is the heir to the throne. Her father wants her to return to her home planet so she can marry one of the husband candidates, but she decides that she wants to marry Rito in order to stay on Earth. Commander Zastin has been ordered to bring Lala back and has already battled Rito. He reports to the emperor that Rito would be suited to marry Lala, after hearing Rito say that marriage is impossible unless it is with the person you love (Rito was actually defending himself but Zastin and Lala thought he was defending Lala). With this speech, Lala truly falls in love with Rito and decides that she wants to marry Rito. Her father decides that, if Rito is able to protect Lala from her fiances, then he can be her fiance, but if Rito cannot protect Lala from her other fiances, Lala's father will kill Rito and destroy Earth. 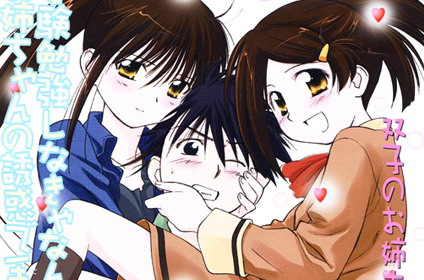 Keita has two older step-sisters, Ako and Riko, but since they aren't related by blood, they love him in a lustful way. After a mishap at school, Ako and Riko finally confess their love to him. Keita dislikes the thought of seeing them other then brother and sister, but as he tries to enter the same school as his sisters, he slowly becomes attracted to them.

After failing his high school entrance examinations, normal schoolboy Aono Tsukune happens to be accepted into Yokai Gakuen. It is a school to which monsters go, and it has this rule: if a human being should find out about the school, he must be killed. The situation frightens Tsukune, but he is encouraged by Akashiya Moka, a vampire of great beauty who takes a liking to him, and he resolves to stay at the school. Other beautiful and unique girls then appear one after another, causing no end of trouble for Tsukune. How will his school life turn out?

Adaptation of the BaseSon eroge.

Koihime Musuo re-imagines the classic Chinese historical novel Romance of the Three Kingdoms in action/love comedy form with a nearly all-female cast. The game itself featured upwards of 30 female characters. 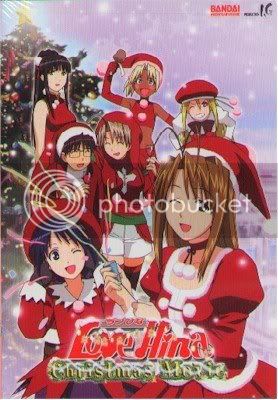 As another round of preliminary tests approach for Keitaro, so does Christmas. And as the first Christmas of the millenium, there is a rumor that if one confesses his love on this special eve it will come true. Keitaro has decided what he needs to do on this Christmas eve, but being a retaker can he afford taking attention away from the tests on the same day... 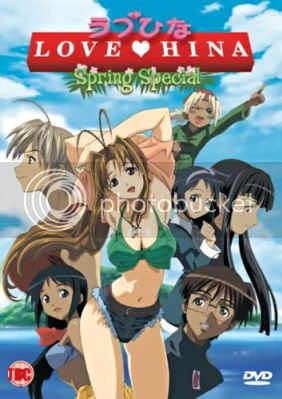 Plot Summary: The tests have come, and Keitaro can only hope to succeed. However, in the final stretch, he fails miserably and daydreams through the test. Assuming that he has failed, he runs away, so the rest of the cast hunts him down on a remote desert island to bring him back.
Running time: 45 minutes
Vintage: 2001-04-01 (26:00-26:55) 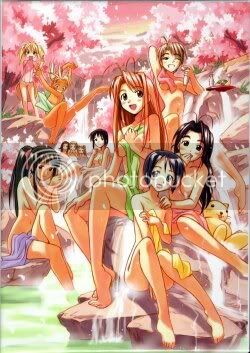 Synopsis
Love Hina Final Selection, tells the story of Love Hina.
Then gives Keitaro's final selection of girl, for those unfamiliar with Love Hina, Keitaro is the main character, surrounded by girls in an all girl dorm, he is 20 unlucky and eventually becomes a cool, respected hero to the girls, they all end up having a crush on him and he must choose, this OVA features his decision. 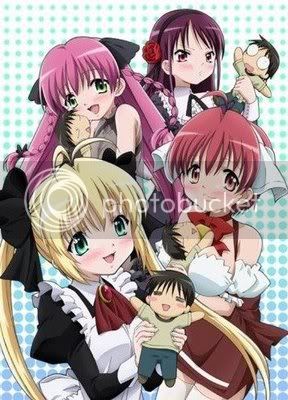 Plot summary
Set in a near future, a time where robots are common workers for their owners. Takaya Murase has just purchased a maid robot from a robotic doll distriubutor, MaidWorks. Ready to live a normal cleaning, cooking, and serving life to her owner, Yui is purchased, by Takaya but he has other plans for her...like dressing her up in dress-costumes of his fantasies and more. 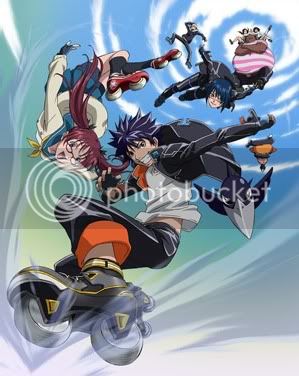 Alternative title:
エア・ギア (Japanese)
에어기어 (Korean)
Genres: Comedy, Shounen, Sports
Age rating: Teenagers (May contain bloody violence, bad language, nudity)
Plot Summary: Minami “Ikki” Itsuki, is a student and a delinquent. Also known as the “Unbeatable Babyface,” Ikki is the leader of the youth gang by the name of “East Side Gunz.” Upon his return home after being humiliated by a street gang of Storm Riders called the Skull Saders Ikki discovers a secret hidden from him by his benefactors, the Noyamano sisters. The sisters belong to a group of Storm Riders who go by the team name of Sleeping Forest. Keen on helping Ikki to regain his confidence and pride, they supply him with a pair of Air Trecks (abbreviated as “AT”). Ikki eventually settles his grudge with the Skull Saders, but in the process he receives more than the simple satisfaction of revenge. Determined to experience the sensation of “flight” for as long as he can, our headstrong protagonist is quickly sucked into the mysterious, yet irresistible world of Air Treck.
Running time: half hour
Number of episodes: 25
Format: AVI, 170mb+ 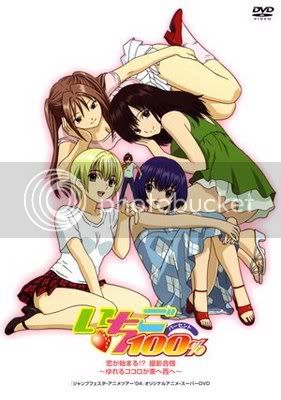 Plot summary:
Manaka Junpei encounters a beautiful girl on the roof of his school. Pictured against the backdrop of the setting sun, with her wind blowing through her hair, Junpei manages to catch a glimpse of her strawberry panties. Embarassed, the girl runs away before he even gets the chance to talk to her. His only clue is the math notebook she dropped, with the name 'Toujou Aya' written on the cover.
The next day, he finds that the 'Toujou Aya' who owns the notebook is the exact opposite of the girl he saw on the rooftop. There’s no way it can be her, can it? 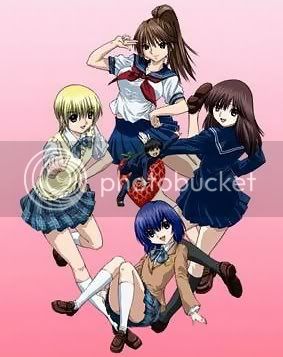 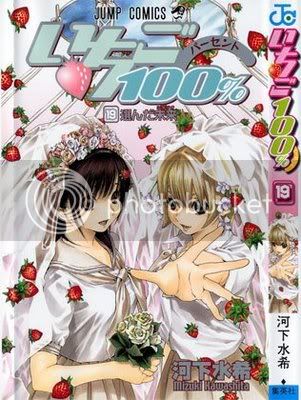 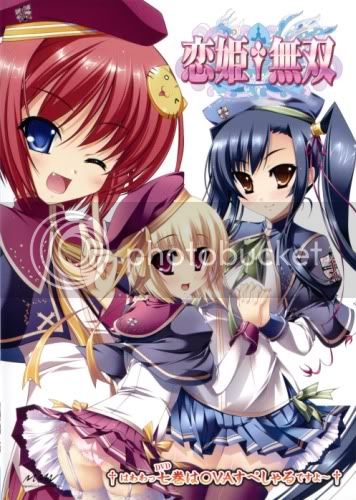